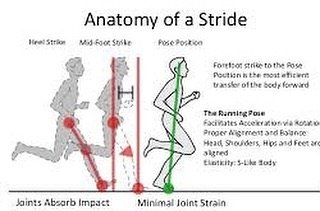 There are 3 classifications of foot strike patterns during running: rearfoot, midfoot, and forefoot striking. Each pattern refers to the part of the foot contacts the ground first while running. Prior to the advent of the modern running shoes in the 60’s, it was believed that runners were midfoot/forefoot strikers. At that time, running shoes had little support. However, once shoe companies started adding cushion and heel elevation to their shoes, the heel striking pattern started to become more prevalent.​

Establishing which gait pattern is less injury prone has also been a controversial topic. Landing on the midfoot and forefoot allows runners to absorb the impact from the ground through the Achilles tendon. The premise adding cushion to shoes was to decrease the forces upon the foot during the impact phase. However, this allows runners to increase gait length and land more on heels, which eliminates the use of the Achilles tendon as a shock absorber. greater impact forces can be seen when running in cushioned shoes vs. minimalist, which can lead to increased overuse injuries in runners. An increase in tibial stress fractures and plantar fascia injuries have been observed when athletes switch to a minimalist shoe.​

Which gait pattern and shoe is best for running? A way to approach would be to start with a gait analysis to determine what your gait pattern is. If you are a rearfoot striker and want to retrain your gait biomechanics to land more on the forefoot, it is extremely important to start off slow with short runs and gradually increase your training to avoid acute stress injuries.