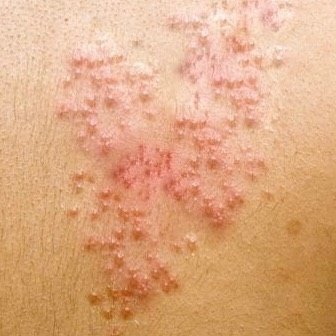 A middle-aged man comes in to see the doctor because of back pain that’s developed over the past few days. He did not hurt his back, has no muscle soreness or kidney issues, and is not having trouble breathing. After pulling up his shirt, there is a red rash with blisters in a band-like pattern which the man says formed a day or two after the pain started. Although there are other conditions that can cause these symptoms, he likely has Shingles.

Shingles is a condition caused by the reactivation of the virus that causes chicken pox that this man may have recovered from many decades ago. After recovering from chicken pox, the virus remains in his body in an inactivated state and can “reawaken” years later, presenting as a painful band-like rash called shingles. It can affect people of all ages but is particularly common in adults over the age of 50 and in those who have a weakened immune system.

Those affected often complain of an itching, burning, and tingling sensation of the skin that usually occurs on one side of the chest, abdomen, and back. A few days after experiencing these symptoms, a blistering band-like rash can form that may eventually ulcerate and scar. Treatment of shingles usually involves a combination of medications. Antiviral medications like Acyclovir helps to stop the virus from multiplying. Pain relievers like Ibuprofen or acetaminophen are often used to control pain, but other medications like gabapentin may be added if the patient is experiencing nerve pain commonly referred to as “postherpetic neuralgia”.

To prevent shingles, two doses of the varicella vaccine can be given to children under 13 years of age, the first dose given from age 12-15 months and the second dose at age 4-6 years. This vaccine can prevent children from being infected by the chicken pox virus which allows them to avoid the virus reactivating later in life in the form of shingles. For adults 50 years or older, there are shingles vaccines available that can prevent shingles flare ups or lessen the symptoms if a person still gets shingles.