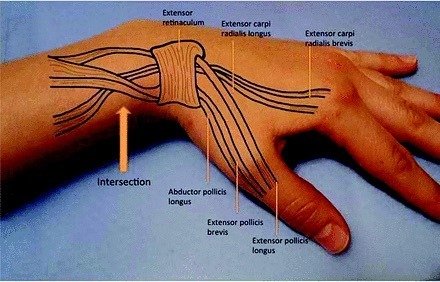 Among the most common causes of tendinopathies of the thumb and wrist are de Quervain’s tenosynovitis (DQT) and intersection syndrome (IS). DQT, also known as “New Moms’ Syndrome”, is seen often in young, female patients who are picking up children daily – a motion that involves repetitive radial deviation of the wrists.

Differentiating between DQT and IS can be challenging in the clinical setting. On physical exam, pain along the radial most aspect of the wrist and a positive Finkelstein’s maneuver favors the diagnosis of DQT. Pain that is more proximal and dorsal in nature or a reported “squeaking” sensation in the wrist with motion is indicative of IS. Aside from tendinopathies, it is also important to rule out first CMC joint arthritis and or scaphoid pathology. Ultrasound or other imaging modalities may be helpful to localize site of tendinopathy.

Initial treatment options for either condition include rest, ice or heat, anti-inflammatories, cortisone injections, or immobilization via bracing. In some cases, surgery may be necessary if conservative measures fail to improve pain. Patient in this case was found to have IS and elected to undergo ultrasound-guided cortisone injection and immobilization with thumb SPICA splint.