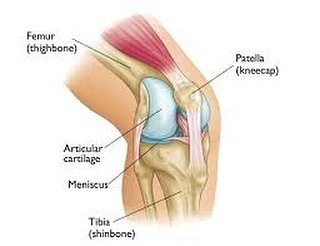 56-year-old man with history of running 4 days a week presents to the clinic with 3-month history of b/l knee pain. The pain is described as an ache around the patella and is exacerbated by stairs, squatting, and running. He has crepitus in his knees on flexion after extension, left knee than right.

Patellofemoral pain syndrome (PFPS) is a common cause of anterior knee pain in adults younger than 60 yo. The condition is often called “runner’s knee,” and is typically diagnosed without imaging, as structural damage. The most specific test is the patellar tilt test and the most sensitive is pain during squatting. Besides pain and patellar tracking issues, the physical exam is typically benign.

Risk factors include female sex, increased physical training, and quadricep weakness.The patellofemoral is composed of the patella acting as a lever above the trochlea of the femur. The patella is stabilized by numerous tendons and ligaments, including the quadriceps tendon, iliotibial band, patellar ligament, and medial/lateral retinaculum. Force directly over the joint is provided by the quads, the vastus medialis obliquus muscle provides the medial force on the joint.

PFPS is thought to be caused by increased, pressures on the patellofemoral joint, one of which can be malalignment of the patella during motion. Due to the nature of the VMO, quadricep imbalance because of improper exercise mechanics can lead to poor tracking of the patella with it favoring lateral motion. Increased Q angles, the angle between the anterior superior iliac spine (ASIS) and to the center of the patella, can also increase lateral forces on the patella. Higher Q angles are more prevalent in women.

Rx of PFPS will focus on ice and analgesics. During this period, KT tape to help relieve patellar stresses has been shown to reduce pain. PT should be started once pain is tolerable. A common precipitating factor of PFPS is a weak VMO. This can be targeted specifically with ball clench extensions, twisted leg raises, and ball wall squats.